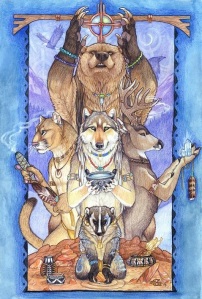 I spent a long time this morning by the pond. It seemed only fitting after my Mabon ritual last night. During all of my rituals, I always give honor to the friends and comrades who have come to show me the way. There is black and white cat, Mama Crow, my own cat Merlin, and that little blue chihuahua. I also add the other pets in the household, whether they show any interest in Magick or not. I love to work with animal spirits during ritual. As I have said before, I have always felt closer to animals than any human I have ever met. Animals have a purity that humans will never have. I have a crow skull that I use in my rituals. It was collected from a dead crow. I will not harm an animal for magick. It does have a powerful energy, though. You can feel the power and spirit of the crow as you work with it.

So, when I went out to the pond this morning, there was that little blue chihuahua at my side and of course I see black and white cat padding quickly in our direction. It’s funny….I was telling a friend yesterday that he never stays around long enough for me to bring him home. He always disappears into the nearby trees whenever our time at the pond is done. I settled against oak tree and began thinking about all of the animal magick that surrounds me. I see large birds flying across the pond. I guess they are cranes. I can’t really see that far off without my glasses. As the sun moves higher into the sky as the morning progresses, I can hear Mama crow in the distance. She is sitting on top of her phone pole in the parking lot.

During this time of bliss, I am reminded of how animals have always led me in and shown me directions in my spiritual path. As a child, I was constantly guided by owl. I was never one afraid of the dark, but when I seemed lost or confused about life in general, owl would appear in the tallest darkest tree in the woods. I might not see him, but I would always hear him and I would talk out the worlds problems with him. Many a night that old owl would show me which direction to walk in whether he realized it or not. Of course, through my life, there have been multitudes of cats there to add a touch of cat magick to the many situations I encountered. One such cat was named Apple Dumpling. She was a cantankerous old calico. She followed me everywhere. She was my protector. I was always scared to death of mice and of course there was no shortage of mice on our small farm. I would watch her pounce and I knew once again she had protected me from the vicious monstrous mice that lived there.

My memory drifted this morning to my wonderful old dog, Vagabond Patch or Patches. She was the sweetest, smartest Australian Shepherd anyone could ever know. I loved her dearly and she loved me. The shepherds had their own version of the Taj Mahal out next to the pasture, but I knew that Patches was afraid of thunderstorms. At the first sign of any such storm, I would sneak her into the house and into my bedroom. I got in trouble for it, but it was so worth it to have that wonderful double-coated blue merled piece of magick curled up next to me. It was this fear of thunderstorms that would be her end. She was thirteen or fourteen years old…you could tell there was some dimentia setting in. She had been promoted to permanent house dog status by then. One evening a thunderstorm came up and as my dad came in the front door from work, she ran out the door. I ran after her calling for her but she just kept running. We looked every inch of that county over for a month with no sign of her. We never found her, but I know that she is still with me….I feel her. It is just as real as those nights she was curled up in the bed next to me.

As I was sitting by the pond today, I could feel the breathing of that little blue chihuahua.  Calmly and effortlessly he would inhale and exhale.  I knew he was napping.  I looked beside him and there is black and white cat, breathing just as calmly and just as effortlessly…napping also.  Then a thought came to me.  Here they sit in the lap of the one person that they trust implicitly.  They know that I am there to protect them as they let their guard down enough to rest.  Then I hear Mama Crow.  It is almost as if she is echoing with her caw what is going through my mind.

Why should I not do the same thing with the Lord and Lady….especially as the year winds down.  It is time to let my guard down and let them do what needs to be done in me.  The cooler months are the preparation time.  Everything pulls into itself so that in the spring the new growth will come forth.  I will use these months ahead for study, introspection, for becoming more of my magickal self.

I watch these two new fast-friends as they drowsily come back into the consciousness of this world.  Friz leans over and licks that old black and white cat and of course that cat leans right into it.  They look around as if everything is new…..but then again, isn’t it?  Everytime we blink, something changes in those brief whispers of time.  Everytime we sleep, we wake up to something that was never like that before.

I can swear that when I look down at the face of that little blue chihuahua looking back up at me, he is smiling.  It’s almost as if he is saying to me, “I told you something magickal was going to happen today.”  I also can swear at that moment that I felt the brush of a double coated blue merled aussie against my shoulder as I tried to get up.

Something magickal did happen today.

1 thought on “Conversing with the Fur and Feather People”