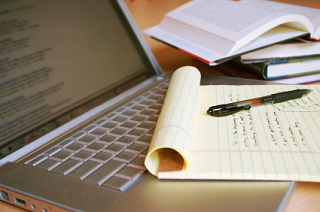 It seems as if my pens, paper and computer have lain dormant for quite a while.  As I relaxed on the sofa this evening after a day of hiking, I could feel my thoughts bringing the past few weeks together into a blog post.  I peeled back the blanket I had been napping under and made my way to my desk…all under the grimacing face of a little blue chihuahua who had made himself far too comfortable nestled in the crook of my leg.

I made myself a promise at the beginning of 2015.  I vowed that I would spend more time living life…experiencing new things…going on new adventures.  I had started seeing life as too routine…a little too mundane.  I was starting to settle into middle agedom.  It was becoming far too easy just to come home, put on pajama pants and crash mindlessly in front of the television.

My partner and I had planned a trip to Orlando with some of his family.  The planning all came to fruition a couple of weeks ago.  We had made arrangements to go to the Wizarding World of Harry Potter at Universal Studios and to the Magic Kingdom at Disney World.  I am a huge Potter nerd, so that part of the trip was for me and me alone.  My partner was so patient as I rattled on about the movies and books.

We got to Universal early that morning.  I practically flew through the park…I had to locate Diagon Alley.  As I rounded one corner, there was the Night Bus.  Stan Shunpike was standing next to it with the shrunken head in the window.  It wasn’t exactly easy finding the entrance to Diagon Alley, so we engaged the young man in conversation. 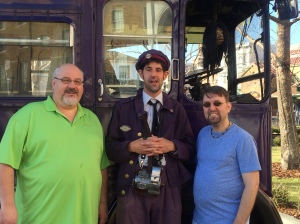 He directed us toward the entrance. As I moved through the brick wall, my breath caught in my throat.  It was a sight like I have never seen.  It felt as if I had just come home after a long, long trip.  All around me was whimsy and magic and  all things fantastical.

My partner stood back and smiled as he watched me run from store to store…gazing in all the windows.  He told me later that the only thing missing was the broom…otherwise, I was flying on my own.  We went on the Gringott’s ride, we wondered through the shops.  We stepped into the line for Ollivander’s Wand Shop.  Even with the children in line, there seemed to be a type of reverence as we stood there.  We were ushered into the heart of the shop and an older woman was chosen for the wand ceremony.  Her excitement could hardly be contained as the birch wand with the dragon’s heart string chose her.  Then as we were taken into the purchasing area, I chose Sirius Black’s wand…interactive of course.

I made my purchase and my partner and I went to lunch at the Leaky Cauldron.  The traditional English fare and butterbeer had us stuffed to the gills.  As I looked at the stack of cauldrons beside me, Jay announced that he needed to use the facilities.  We walked over toward the restrooms and I wandered into the beastiary.  I walked outside to try my wand with the interactive windows and saw a little girl wildly waving her wand at the window. 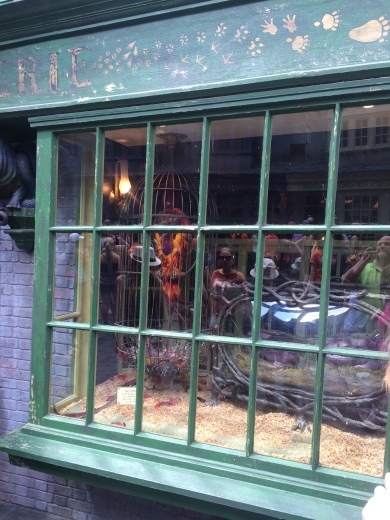 I watched the little girl as she dropped her arms down by her side and her chin went to her chest.  I heard her say, “I guess I’m just not magical.”  It broke my heart.  I couldn’t stand the thought of someone whose heart was so excited about all the magic around her (whether it is an illusion or real) thinking that there was no magic in her at all.  I knelt down beside her and held her arm and wand toward the window.  I told her that all she needed to do was to picture the magic happening with all she had.  As she made the motion toward the window, the bird stopped singing and toads began to move.  Her eyes lit up and she yelled out, “I do have it!  I do have magic!”  Her mother came up to me a moment later and told me that she really appreciated the kindness I had shown her daughter and that now even she believed there really was magic in the world.

The past few weeks have found me at Hogwart’s, Diagon Alley, and every part of the Magic Kingdom.  I have seen children and adult’s alike excited by the very thought of magic being real.  At the end of the day, I was able to hold on to that excitement because magick encompasses every area of my life.  It swirls around me and within me on a daily basis.  Many people have asked me why I spell magick with a ‘k.’  A friend posted something on Facebook that said it best:

Didn’t we all grow up entranced by the illusion?  Isn’t that what first brought us to magick in the first place?  That thought…that hope….that somehow, someway….it all has to be real…isn’t that what motivated us to find our way to the Craft.

To others we may seem odd…eccentric.  After all, we believe in spells and energies and potions and all manner of magickal beings.  So what?  I am who I am.  I am a witch.

Last night, I fell asleep in the woods.  I went to the woods after a stressful day at work.  I left my cell phone and anything else that might remind me of the modern world behind.  I wrapped myself in my cloak and made my way to that familiar spot in the woods.  I dug out a hole and surrounded it with stones and built a small fire.  I stared at the sky and felt the cold ground beneath me as I called out to the elements and the goddess to clear my mind and awaken me to the sounds of the earth around me.  I remember starting to count the stars.  I awoke at midnight with the fire completely gone and a chill to my bones….but I was relaxed.  It was as if the earth herself soaked up the stress of the day and pushed her own strength into me.

I woke up early this morning to go hiking at Red Top Mountain State Park.  I went with friends and we took a picnic lunch.  There was no agenda….just a need to escape into nature and re-connect.  We walked, we laughed, we absorbed earth, wind, and water energy….we soaked up the fire energy of the sun.  For today…magick rushed around us.  We could all feel it sweep the week away and usher in renewal.

We got back to the condo and our bodies called for rest.  We each snuggled under blankets and let our minds be captured by dreams.  I dreamed of the magick of the moon…the stars…simple things that hold far more magick than they are credited for.  Sometimes letting ourselves be swept away in the magick of those simple things is some of the most powerful magick around.