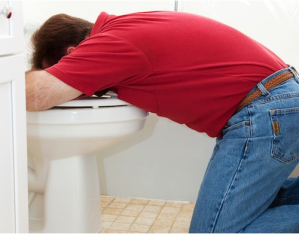 This week was a hard week physically for me.  I caught some god-awful virus through work that completely threw my system off.  While I have been trying to lose weight, the violent projectile vomiting that came with this virus, is not what I had in mind.  I have lived for almost five days now on Pedialite, Ensure, and cold-pressed juices.  I will say one thing though,  I may not have much of an appetite for food, but I have hungered after time in nature…I have longed for the songs of the cicadas and dramatic dances of the trees.  I have dragged myself from the house just to spend time with familiar voices, spirits, and animals.

The past couple of weeks have been full of pleasant surprises from the past for me.  My mother had been digging through boxes of things that my grandma and grandpa had collected over the years.  During her digging, she came across a collection of gnomes figurines that had belonged to my grandfather.  He collected a series of figurines made by Tom Clark at Cairn Studios in Davidson, North Carolina.  My grandpa was the reason that I started collecting them.  I was talking to my mother on the phone one night and she asked if I wanted her to ship them to me.  Of course I jumped at the chance.

When I opened the box, I saw familiar faces of old friends from my teen years.  My grandpa was a rotund little man.  He would sit around for hours and tell us stories of gnomes, and woodland elves and nymphs.  Even as older teens we were enraptured by the tales.  It was if he knew these creatures personally and had walked the same paths that they had walked.

I know that I have recounted many memories of both my Cherokee grandma and my little Scots-Irish grandma…but my grandpa always seemed to keep us kids at arms length.  The only time that he seemed to engage us much was when he would tell us his stories.  Most of his life he was far too serious…gruff and cruel at times.  It was only during these stories that a twinkle that seemed to have faded into years of far too much bitterness and responsibility, leaped out at us and we would laugh alongside him for just a while.

Now back to that box…that wonderful, magickal box of his that my mother sent me.  In the bottom of the box, wrapped in newspaper dated from the 1930’s, was a small hardback book.  The cover was a worn green and there were white flowers spread across with a mountain scene in the background.  The book was written in German and the only information that gave me any indication of who it belonged to was her name and the year 1898 inscribed on the title page.  I did look up the translation of the title.  It means simply:  Edelweiss:  Stories for Young and Old.

I called my mother to see if this book was left in the box by accident and if she wanted me to send it back to her.  She quietly said that it was time for things to move to other generations. I asked her about the woman who so unobtrusively had written her name with only the year beside it.

My mother explained that she was a very quiet woman who had not been treated so well by her husband.  She had found solace in books and music.  She said that while my grandfather didn’t talk much about his mother and father and brothers, my grandmother found her mother-in-law to be a likable woman.  Ma said that it wasn’t unusual for my grandmother to walk up behind her as she shelled beans or hung the wash and hear her singing old German folk songs….and she would tell my grandmother stories about growing up in the German countryside.  My mother told me that she is where my grandpa got his love for the forest folk.  She said that my grandmother had told her of memories my great grandma had of the boys all gathered around her.  She would tell them stories of the forest gnomes and elves and changelings.

My mom laughed as she remembered one story my great grandma had shared with my grandma.  She said that one night she found all of the boys tangled up in bedsheets with flashlights.  They had gone out to catch them a kleiner Mann (a little man), and got tripped up in the sheets.   She said it was one of the few times that my grandma could remember her laughing.  Ma said that my grandmother remembered her as a wonderful cook.  There was always fresh bread and sweets on the table.  My grandma passed my great grandma’s recipe for Pfeffernusse cookies down to me.  I added the recipe with some modernization.

As I sat in the woods yesterday morning, my memories swirled back to everything I had talked to my mother about.  My great grandma has been dead since 1938 and my grandpa in 1992.  My grandma lived until 2007.  Each one of them is a part of me.  As I sit in the shadow of the trees, it is easy to imagine an old German folk song softly floating past my ear…or a story of the forest folk and an old man’s laugh.  Just as I have settled into a memory that isn’t really mine to begin with, Frisbee jumps and barks at something moving through the bushes.  It startled me for a moment and then I tell him to calm down…after all, it’s probably a gnome or elf or one of many fae.

I have pieces of my ancestors all around me…books, hats, figurines.  When I look at these pieces, it is evident how the parts of my own soul came to be.  I am a puzzle…made up completely of past present and future.  I have the strength that was forged by those who came before me, the power that is so much a part of me now, and the legacy that I leave for those who come after me.